Before the topics of our blog-series can be presented, it is a necessity to present a minimum of basic and underlying concepts used throughout the whole series. The goal is not to take every detail, proof or kinky speciality of the former concepts into consideration, but to create a brief understanding of the process. Mathematically trained readers are referred to our literature or are engaged to write a comment or a short notification via our contact form, for deeper literature or source references.

The organization of the basics is described in the following: Initially, the whole concept will be presented. Secondly, the historical development is shown to be continued with a more detailed presentation of the methods underlying the concepts presented at the beginning.

Before getting started the central question should be answered first:

What are mathematical spaces?

A space is a set (or so called universe) with some added structure.

Therefore, it consists of mathematical objects (mostly seen as points) which are interrelated. The points can be elements of other sets or of functions on other spaces. The way how the points are related can be viewed using morphisms (e.g. homomorphism, isomorphism). Morphisms (e.g. homomorphism) describe mathematical mappings which in case of homomorphism preserve structures from domains to codomains. A general definition of what a structure is was provided by a group of mathematicians called “Nicolas Bourbaki”.

The previous section gives a short description of “space”. The following graphic depicts an alphabetically sorted overview of common spaces. 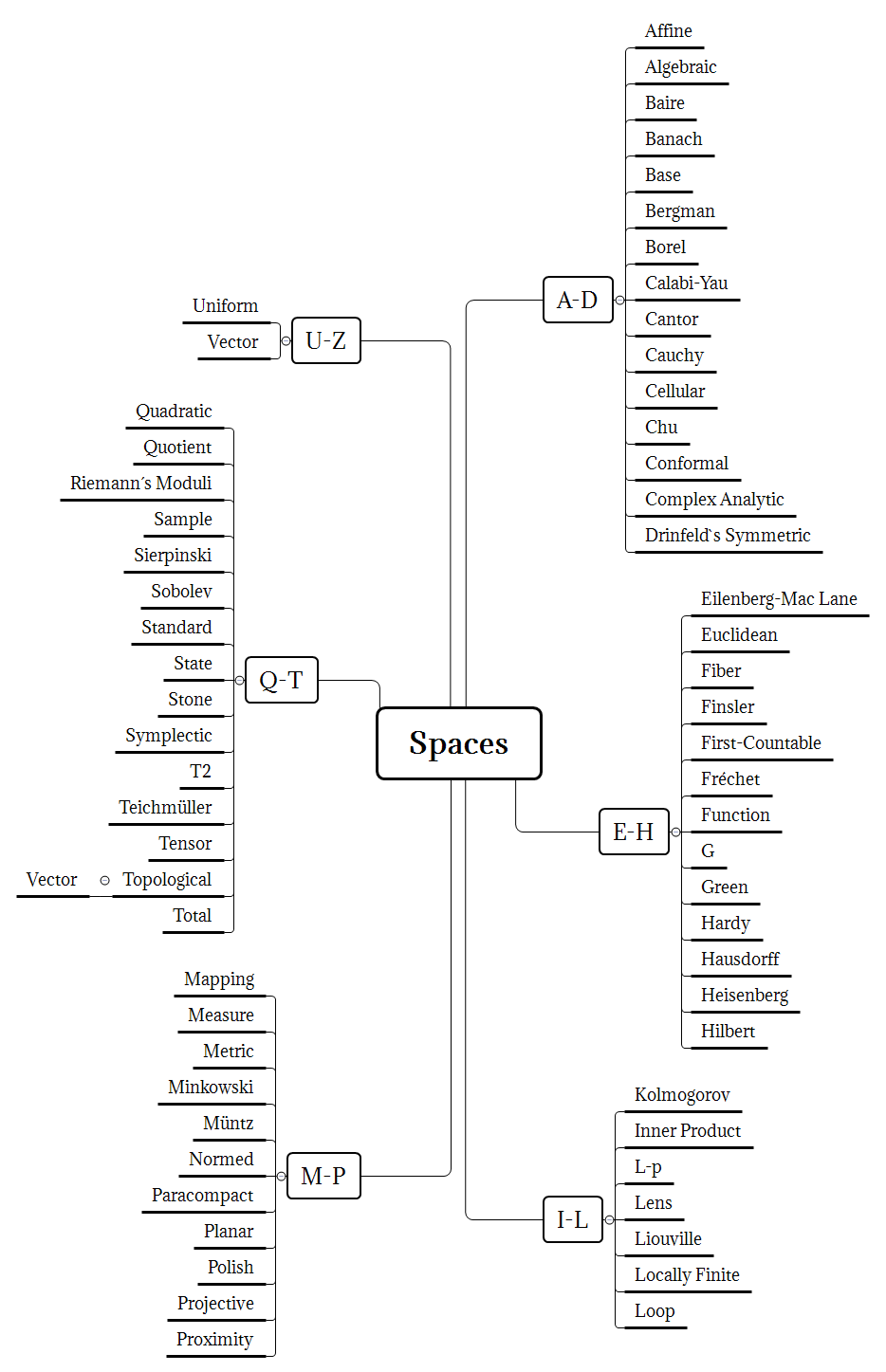 Afterwards, some historical cornerstones and all concepts mentioned above are explained in a more detailed manner.

Spaces have been seen as geometric abstractions of reality denoted in three dimensions and were described by the father of geometry, namely Euclid (325-270 BC) who created axioms around 300 BC. In 1637, René Descartes (1596-1650) exploited the insights of Euclid in his methods of coordinates. At this point in time, two major concepts were related with spaces, namely congruence and similarity.

Congruence can only be seen if two points are transformable into another using an isometry, which corresponds to a distance preserving transformation between two metric spaces (assumed to be bijective).

Similarity can be described as uniform scaling.

In 1795 Gaspard Monge (1746-1818) introduced the so called projective geometry, which resembles as third concept. This led to a development that was highly critical of Euclidean axioms. In 1816 Carl Friedrich Gauss (1777-1855), in 1829 Nikolai Lobachevsky (1792-1856) and in 1832 János Bolyai (1802-1860) worked on the concepts of non-Euclidean hyperbolic geometry. The existence of well-defined triangles bearing a sum of angles greater than 180° gave rise to problems since it was contradictory to Euclidean insights.

Eugenio Beltrami (1835-1900) and Felix Klein (1849-1925) resolved the issue in the years 1868 and 1871 respectively, which led to the abandonment of Euclidean geometry as “the absolute truth”. Additionally, it resulted in a change of view of axioms which henceforth were regarded as hypothesis instead.

The work of the group “Nicolas Bourbaki” as well as axioms from Hilbert, Tarshi and Birkhoff brought relevant reformations into the matter.

For a better comprehension of the topic, it is time to elucidate morphisms, especially the isomorphism. As mentioned before, an isomorphism is a kind of homomorphism with structure preservation properties. A homomorphism resembles a mathematical mapping that can be reversed (i.e. the mapping preserves structures moving from domain to codomain).

In a nutshell, the most important fact to remember is the preservation property .

In general, spaces can be divided into three levels (not further mentioned in this post) and two basic spaces (vector spaces & topological spaces). In the following, only a few selected types of spaces are briefly introduced, namely those which are necessary for the blog series.

In the second part of the basic blog posts, measure spaces will be introduced. In order to give a compelling overview of all these kinds of spaces and their interrelation as well as the manner in which spaces are ordered, the following graphic is introduced.

As seen in the introductory part, spaces consist of sets or so called universes. Now it is time to give a brief answer to the question:

The term set (from the German word “Menge”) was coined by Bernard Bolzano (1781-1848). The founding father of set theory Georg Cantor (1845-1918) stated an initial definition (which in the meantime has shown to be inadequate and has been replaced by the axiomatic set theory) of a set:

“A set is a gathering together into a whole of definite, distinct objects of our perception or of our thought – which are called elements of the set.”

The last important concept in terms of spaces is structures. A structure itself is an object which stands in relation to a given set and provides additional meaning and explanatory fragments. Examples of a structure are measures (introduced in the second part), algebraic structures (e.g. groups, fields), topologies, metric structures and many more.

In the second part, further questions are answered (e.g. what is a measure , what can be done with it and how it is related with measure spaces and the main topic of the blog series?).

Images and graphical content are taken from "wikimedia commons" database and are licensed using a CC-license if not states otherwise. If no reference is granted, the content belongs to the author.